Posted on February 9, 2016 by tomsprints

I write two blogs. They show the major demarcations of my life over the last few years. The other blog is about my life as an active sports-person. It allows me space for some introspection. Last time I posted there, I wrote about coincidence. This blog here is more about creativity and reminiscence but I think I’m back to coincidence here this time, too. A coincidence in itself.

In the spring of 2013, I visited the Imperial War Museum in London. It’s not somewhere I go very often, but it holds a collection of “war art” second to none. I’d gone to see some of the First World War stuff. For the first time, the genius of the work of the prolific painter Paul Nash really hit me. Nash was an official war artist who also painted in World War 2. He died in 1946 at the young age of 57. There were some of his WW2 pieces on show, and I was both struck and slightly puzzled by his big canvas called “Battle of Britain” (see below). Commentators and critics have praised the work for its allegorical nature and symbolism, without ever really saying what it symbolised or of what it was an allegory. Well, that’s art critics for you, I suppose.

A year or two before, I’d been to the little collection of largely Battle of Britain-related material at Brenzett  and thought Nash’s view might be of the aerial conflict over the Romney Marsh. I couldn’t place the river, though. But then, maybe the river was part of the allegory? There’s actually some fascinating information about the history and inspiration for the painting on the IWM web site  In fact, it isn’t an observed landscape at all. Whatever, there was something about its simplicity compared to much of Nash’s other work that clearly lodged itself very firmly in my mind – even if I didn’t realise it at the time.

The Romney Marsh is somewhere I’ve associated with quiet drives to the south coast since I was a kid. As a family, we used to make the journey frequently from south east London to Littlestone for the day, and occasionally the weekend. We stayed there longer sometimes, as a relative had a house on the seafront. I have no doubt my love of “big skies” comes from these days of youth. It was pure coincidence, however, that the weekend after visiting the Imperial War Museum, I was driving early on a Sunday morning through the backroads of the Kent Weald, heading for Appledore and down on to The Marsh.

It was cold, but the sky was a wonderful blue and there was little wind. What marked the morning out as special, though, was the profusion of aircraft vapour trails all across the sky. I had never seen so many, nor seen them simply appearing to hang there like permanent fixtures. I assume some quirk of the upper atmosphere was causing this. I stopped the car several times just to look up. On the edge of The Marsh, close to the Royal Military canal, I could resist the temptation to take some photos no longer. By a stand of wild daffodils, on the edge of acres of open ground not yet coloured by spring, I shot three or four panoramas. One of these is the opening shot to this blog, as you’ll have realised by now, I expect.

As I set up the camera, it dawned on me that I was looking at a strangely familiar scene. My poor memory is such that, had it been more than a few days previously that I’d seen it, I’d have struggled to connect the view with Nash’s “Battle of Britain”. It was the vapour trails that made the connection. Now, I’m never going to claim to have set up an opportunity to mimic the Nash painting. Self-evidently, I’d have failed miserably had that been the case, as you can see. And of course, I didn’t have a handy copy of the original with me to work from! The connection was more subtle and almost subliminal. Nash’s painting had made an impression on me that I’d not realised.

I also had no idea at the time that, as the morning’s crows flew, I was no more than five miles from parts of The Marsh well known to Paul Nash in the 1920s.  I only made that particular discovery when looking up a suitable web link about Nash to include in this blog! Coincidence heaped upon coincidence!

And if you don’t know the Chris Wood song that gave its title to this blog, you can hear it here. 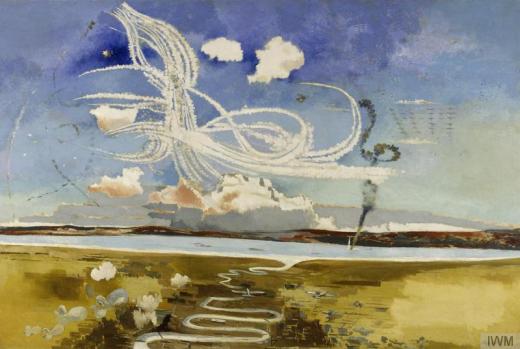