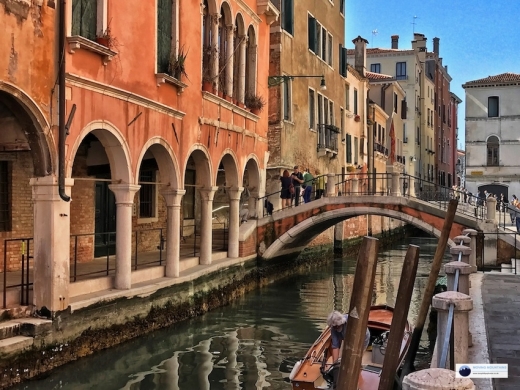 I’ve been back from my most recent trip to the charming crumbliness that is Venice for about a week now, and it’s time I put some thoughts in this blog. I have never really been one to write traditional “travelogues”. I don’t think I can muster my thoughts quickly enough to write “here’s what I’ve just done today” stuff. So, this is a blog with the benefit of a week spent letting my thoughts and impressions “marinade”, as it were. Quite a bit of that time was spent editing my photos from the trip, so my visual impressions were constantly being refreshed – and occasionally what I saw when I downloaded the images I’d taken at the time challenged my memories. Memory plays tricks, as they say, and I think that’s certainly so with colour.

It had been hardly four months since my last Venice visit. Weather conditions in late November were mostly kind, but we lacked for sunshine then, most of the time. Not so this trip. A few wispy white clouds were burning off as we waited for the boat shuttle from the airport to the City – the only way to arrive, by the way – forget the bus! The sky was pure blue an hour later when we fussed around doing all those useful jobs, like buying a week-long vaporetto pass, and studying the various offers available on admission prices to the better exhibitions etc. It was a deliciously warm late afternoon when we arrived at our hotel, buried in a quiet part of Dorsoduro. And I tell you no lie, but between arriving and leaving eight days later, we hardly saw a single cloud in the sky. Sunshine all the way.

For most of the way, when we travelled to our hotel. we were not struck by Venice really looking or feeling any busier than usual. It was basically the same journey we’d made in November. I’d estimate that more than half of visitor faces the nearer we got to the Rialto-St Marks axis were oriental – but then that too was about the same as November. However, we heard a fair bit of English being spoken. Hardly surprising, as the Easter school and college holidays at home were not quite over. 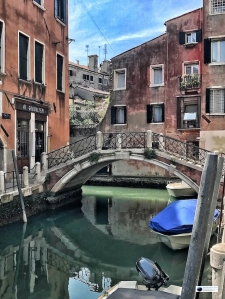 We’d got off the airport boat in Canareggio and walked to the railway station tourist office. What was striking was how empty Canareggio was, and how abrupt the change to more crowded streets came, once we were a few minutes’ walk from the Santa Lucia station. Tickets bought for the week, we hopped on a not very crowded vaporetto down the Grand Canal. This surprised us, as the big Piazzale Roma bus terminal and car park is basically the stop before we got on. But it’s just after lunchtime, we thought; people will have arrived earlier and be leaving a bit later on today.  Down the Canal, very few people got on and off the vaporetto. Mostly locals going about their daily routines. That changed the moment we pulled in to the Rialto waterbus stop. It was rammed solid with tourists. The Canal in every direction was providing good trade for the gondoliers at the regulation €80 for 30 minutes (a price, it seems, that somehow has not increased for nearly 5 years). The cafes and bars on the San Polo side were clearly in big demand. Only four more stops until we had to get off at Accademia. It’s a good job we started fighting our way forward from our seats at the back of the vaporetto when we did: we were lucky to be able to get off the thing when it reached our stop. Hard to fight the crowds when you’re carrying a suitcase.

It took no more than a few seconds to find the street we needed to head for our hotel. This is the university part of town, and was reasonably busy with youngsters we assumed (probably correctly) to be students. Our hotel was in a back street, not on the way to or from anything else, and soon it seemed as if we had Venice to ourselves. Had the vaporetto experience just been a bad joke? We were also the hotel’s only guests for the first two days of our stay. 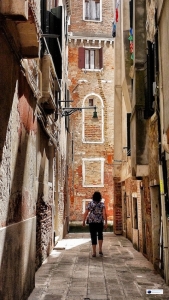 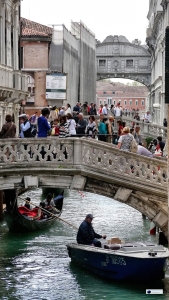 We spent our first full day in the Castello sestriere of Venice (basically the bit behind and north from St Mark’s Basilica). We walked through the Square to get there. St Mark’s was a sprawling mess of people and queues, even at 10am. The neighbouring streets of tat and trinket shops were full of window-shoppers, but once we crossed the first couple of bridges and left these behind, we were in much quieter territory. True, we’d glanced down towards the Bridge of Sighs as we’d crossed the Rio di Palazza and seen something like an illustration from Dante’s Inferno, but heading as we were, away from there in a north westerly direction, all was calm and very welcoming.

We made an early start next morning to visit the Rialto markets. I wanted some photos of the fruit and vegetable market in particular. We arrived at what seemed to be the dip between trade with the local hotels and shops etc, and the point at which the market is flooded with tourists. The many trinket stall that surround the market area were not even open. All well and good, and I got my photos (I’m from a family that ran a greengrocers, you see). We headed into the San Polo sestriere, aiming on a day spent fairly aimlessly rambling its maze of backstreets and little canals. It was there, a couple of minutes away from the market area, that we met them. 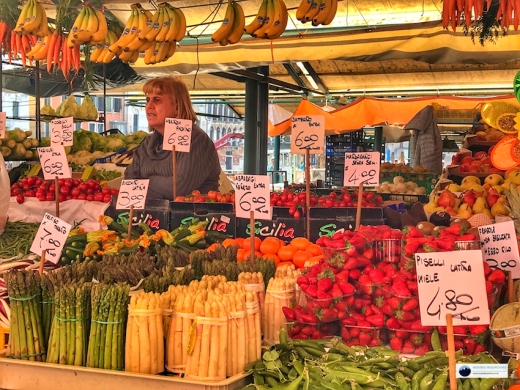 Them? Yes, nameless hordes of tourists, many led by someone waving a flag or umbrella. You could tell those who’d recently come in by coach to Piazzale Roma, because they tended to walk four abreast, with a gap between each pair – just as they’d probably sat on the bus. And these crowds confronted us like a wave of water flooding towards us down any of the streets we tried. No one seemed to be stopping and taking in the area through which they were passing. Their focus was pretty much straight ahead, where the guide/party leader was, Pied Piper-like, hustling them onwards.

On several of the following days, we experienced something similar, whenever we were heading out through part of the city not long after 10am. There was a very clear pattern too. I’d say 80% of the hordes we encountered were heading towards Rialto or St Mark’s Square. On the day we visited Burano, there were big numbers heading to and from the glass ornament capital island of Murano too, although we had no difficulty getting seats anywhere we wanted on our waterbus heading further out to the edges of the Venetian lagoon. No one at all got on or off when it stopped at historic Torcello. We were so surprised that we almost took the opportunity ourselves, to make up for a four year absence, though the insane colours of the next stop, at Burano were too much of a pull to resist. 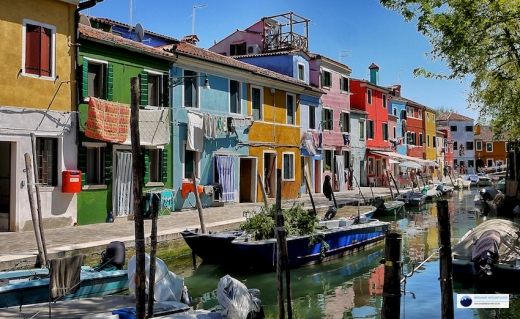 Just in the last few days, I’ve read quite a bit in the media about how the Venetian authorities have erected “temporary” turnstiles in the Rialto/St Mark’s area, allegedly for the purposes of separating tourists from locals, and forcing the former on to designated “tourist routes”. Why “allegedly”? Well, I am enough of a cynic to believe that this might well be a dry run for what will eventually lead to a system of access charges for visitors to the most popular parts of Venice. These have been widely spoken about. It’s not my role, nor this the place, to debate the pros and cons of that. My only reaction to those who claim visitors are loving Venice to death is to say that their attention seems very starkly focused on a few areas in particular. Local people are worried about the “Disneyfication” of their city. It strikes me, every time I walk down streets like the Calle Largo San Marco, or San Polo’s Ruga Vecchia, that that battle was essentially lost quite a while ago when the tourist souvenir shops and fast food outlets (no mater how much of an Italian veneer they profess) became the majority. Venice, for many of its visitors, be they from trains, planes, cars, buses or the obscenely huge cruise ships, has become some kind of “experience” to be undergone; a necessary tick on life’s bucket list.

I find myself wondering how many of those making up the sheep-like armies we dodged ever return to Venice for a second visit? I imagine that perhaps even they would say “No, it was just too full of tourists”.

There, blog done. And I didn’t even get started on another rant about “selfie” culture. That took a lot of self control, believe me!