I was asked an interesting, though perhaps impertinent question recently.

A friend asked “When do you think you were in your prime?” The impertinence is, of course, in the assumption that I might not think I’m there yet! I managed to dodge the point, but it nonetheless exercised me a lot on my 1,000km road journey from home out to the French Alps recently. Once I’d arrived, (and adapted to life with snapped tendons in one hand, as a result of a stupid mishap -packing a bag, of all things!) it was a few days more before some kind of answer dawned on me. If it turns out to be the right answer, I can pinpoint “my prime” to two or three days in September 2011. Yes, that precisely!

The trigger for coming to this particular conclusion was revisiting the Col d’Iseran, above Val d’Isere, on the edge of the Vanoise Alps. It’s the highest paved road in the Alps, at 2,770m, and the fifth highest in Europe .  As my photo at the head of this piece shows, the summit’s nothing beautiful, and it’s little-changed since my first visit, in September 2011. That visit was a rushed job, as I’ll explain, in what might be a bit of a meandering blog. Bear with me.

I was in the Alps back then on the nearest I’ve ever come to “an escape”. I’d just managed to get early retirement from “real work”, I was at last making a good recovery from clinical depression, and, after a few setbacks, I was finally off antidepressants. I was otherwise physically well, and I seized my chance. I found myself with just over two weeks free before the European Masters Games, in Lignano, near Venice in Italy, where I was due to race in the 200 metres, and six weeks completely blank in the diary after that.

Then, my Swiss friend Pino asked whether I wanted to race in a track meeting in Bellinzona, on the edge Italian Lakes, on the weekend before the Games, and a plan quickly fell into place. I’d take my big motorbike, loaded up with luggage, cameras, and running gear, and set off for Lignano via Bellinzona. Just about the only intermediate pre-planned point was to be a Friday night stay at Pino’s house in Luzern, from where we’d head south next morning to Bellinzona, conveniently just the other side of the Gotthard Pass.

Fast forward a week after I’d set off from home. I’d called in on friends in Annecy. I’d ridden my motorbike over the Col du Galibier (a long-time ambition), and I was having fun. I’d been given three months paid leave in lieu of notice when I left my job. Therefore, I was even being paid for all this! 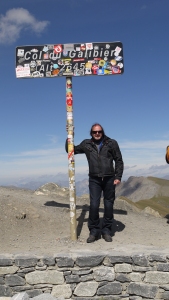 Top of the Galibier

I’d reached Briançon. I had a long day planned from there, across a couple of big road passes, through the Mont Blanc Tunnel, and thence on to the Swiss motorway system, aiming to arrive at Pino’s in Luzern for dinner. Very do-able, but without much of a time contingency should I encounter delays.

It was bright and sunny as I drove from Briançon, over into Italy to Bardonècchia, to take the Fréjus tunnel – a necessary and useful short-cut back to France onto the first stage of my route. The first warning sign I saw was a couple of kilometres from the end of the motorway into Bardonècchia. “Tunnel Chiuso”. Closed. Closed?? It was true, too. There was a train jammed in the tunnel. It would be closed all day, at the very least. Suddenly I faced a 100 kilometre diversion, via the Col du Mont Cenis, to get back on track. Strangely, I have no recollection of that piece of road at all. It was just a case of get on and do it.

I took a brief lunch in Bonneval sur Arc, smugly patting myself on the back for surviving the tunnel misfortune, but very aware that any time contingency on the journey had now almost vanished. The Col d’Iseran, where this blog began, was next. From south to north it’s steep but not a hard route. I hardly even paused at the top, and dropped down the innumerable hairpins and crazy pieces of road through Val d’Isère, past Tignes, and on to the foot of the Col du Petit St Bernard, my last challenge before the Mont Blanc Tunnel from Courmeyeur to Chamonix.

I don’t like the Petit St Bernard Pass. It’s very twisty and 30 km from bottom to top. They don’t even bother to number the hairpins on it, something which often, because they usually number from the top downwards, gives a good idea how you’re progressing. The road over it has been there certainly since the Romans. As has some of its current surface, I think. The next setback was at the 2,188m summit of the pass, just back over in Italy. It was a large, hand-written sign in the window of the café beside the road. “Tunnel Monte Bianco Chiuso” it pronounced. What? I parked up and went in to ask. Yes, there had been a vehicle fire in the tunnel earlier in the day. There were no signs about this on the French side of the Petit St Bernard. The Italian café guy just shrugged in a very French way.

Over a strong “doppio”, I sat with map and satnav, working out my options. I realise only now, that the thought of simply giving it all up as a bad job never once occurred to me.

GPS Jane selected a shortcut avoiding Courmayeur, by descending the Col d’Arpi road, to Morgex in the Aosta Valley, and thence via Aosta and the Grand St Bernard Tunnel. From there it would be downhill all the way to Martigny, and those Swiss motorways. I’d done Aosta to Martigny a few years before. It would be hard work, and add maybe another 100km to my ever-lengthening day.

The Italian descent of the Petit San Bernard Pass is steep and convoluted, but the Col d’Arpi as an alternative was a mistake. A tiny road, through forests, with more hairpins, and more blind, tight hairpins, than I could ever have imagined. It was, to be frank, scary and the thought of that descent scares me still. I hit all the rest of the traffic displaced by the Mont Blanc Tunnel closure on the road from Morgex to Aosta. The traffic jams, on top of normal Friday evening, late holiday-season rush-hour, were grim, but at least the Grand St Bernard Tunnel was definitely open!

I rang Pino from Martigny. It was already gone 7pm and I’d missed the dinner his wife Barbara had prepared for us. Pino advised me to avoid any route to Luzern that went via the Swiss capital, Berne. A bee-line would have taken me through Berne and, as a result, I discovered that I had about four hours on the Swiss motorways ahead of me. The route GPS Jane plotted across Switzerland remains a bit of a mystery to me to this day. I was beyond arguing with her, and just followed every instruction. My body and mind had, it seemed, gone to some other, non-worldly place. If I’d become tired by the journey to this point, I now seemed to have transcended that. I was alert, and it wasn’t coffee! I had total “tunnel vision” on the motorways, to the extent of almost forgetting to stop for fuel. Normal bodily functions had suspended themselves. I’d only eaten a bar of chocolate and downed a double espresso since lunchtime, but I had no thirst or hunger that I recall. I’d been riding my motorbike for ten hours with hardly a break, yet I felt totally focussed and comfortable. This had never happened to me before, and certainly never has since!

I recall endless miles of overnight motorway roadworks on the final stretch to Luzern. Then I arrived. I dragged some luggage off the bike, made my apologies to Barbara for my late arrival. Although it was now after 11pm, Pino announced that he was going to take me on a quick tour of Luzern. We could take in a beer and a burger on the way, he promised! The man is nothing if not an enthusiast in everything he does – a medal-winning decathlete and (in the years after what I’m describing here) also a cancer survivor. Of course, all I really wanted was a bed and oblivion! I got that at about 1.30am, after a day some of which has since seared itself into my memory.

Breakfast was at 7.30. Pino and I were due to be racing (and in his case, throwing too) in Bellinzona in the early afternoon, remember? We got there on time – yet more miles on the clock for me.

I felt strangely relaxed and focussed while warming up on the track. I assumed it was a result of accumulated mental and physical fatigue preventing me from sharpening up before my first race, but my results said otherwise. That afternoon, I placed second in a classy 100 metres race, and an hour or so later won the 200 metres convincingly. Both of my race times were my personal bests for the 2011 season. This was itself a shock and surprise, given that a month previously, I’d been racing in the World Masters Championships in California. There, I’d contributed second leg to our silver medal-winning Great Britain sprint relay squad, so I’d had a good year up to this point. 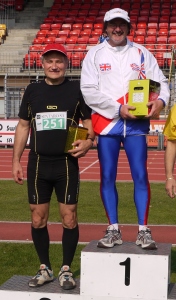 Pino and I after the 200m. My prize was several litres of local apple juice!

And I still had it in me to stay awake through a big get-together with many Swiss and German masters athletes in Bellinzona that evening, and to drive mountainous miles on the Sunday to the fringes of the Italian Dolomites. I expected supreme fatigue to overtake me in a day or so. It never did! I still look back on that weekend in 2011 with wonderment. Revisiting parts of the route in the last week or so has impressed on me that it really was a journey out of the ordinary.

So, back to the impertinent question: when was I “in my prime”? One weekend in September 2011 is going to be a very strong contender!