I don’t drink a lot of it, but what I do drink is carefully chosen. A fair bit of my current collection at home (around 60 bottles) reflects places I’ve been to over the past few years. It’s predominantly red wine, though not exclusively. I don’t have room at home (or the money) to have a proper wine cellar. Like much in the house, where the wines are kept occasionally gets a bit disordered. I’m not organised enough to keep a proper wine book, so I try to keep in memory the stuff that needs drinking soon. However, as I found very recently, my memory’s clearly not what it was.

Winding the clock back nearly ten years would find us enjoying Christmas 2006 at the Palazzo Contucci, in the delightful Tuscan town of Montepulciano. It maybe wasn’t quite as grand as that might sound, but the Palazzo is right on Montepulciano’s Piazza Grande . It’s the only building there offering a self-contained apartment looking out of the piazza. It was also inexpensive and available, when as usual, we left our booking a bit late. I’ve included a photo here of the interior of our simple but elegant apartment, and a panorama of the Piazza Grande. Ours is the building with the red and white notice on the wall, to the right of shot.

We travelled miles around Tuscany on that trip. I was still shooting film, and lugging a medium format Bronica and tripod with me, so I don’t perhaps have as many photos from then as would be the case if I went back nowadays. The main shot above is an intentionally “arty” shot of the landscape near Montepulciano early one frosty, but technicolour morning. One of the great things about visiting Tuscany at Christmas is that sunrise is at about 8am. Dawn starts are really quite painless, even allowing for the photographer’s head still pounding from the previous evening’s indulgences.

Our apartment had surprisingly poor cooking facilities – ok for Italian-style breakfasts, but in no way capable of managing a proper meal. We ate in the evening in a couple of great restaurants, even given that there were only about three in the town reliably open at that time of year. However, our adopted hang-out was the Caffe Poliziano in the main street of Montepulciano. It’s famed for its coffee and cakes, but does a good line in evening meals too. There are photos of it on Trip Advisor etc, but it doesn’t have its own web site, and we were there in the days before smartphones could capture every experience. Its daytime menu still includes “ciocalato calde con marajuana”. Presumably not quite the “wacky baccy” sort!

We visited it on Christmas Day and New Year’s Eve during our ten day stay, partly because anywhere else had been booked up long in advance by locals. As a parting gift we were given a bottle of Poliziano Vino Rosso 2003 for Chrismas and a 2005 for New Year. The wine had been our choice at nearly every meal we had there, and the family running the place were proud of its quality. The bottles were smothered in jackets and other laundry in our suitcases when we flew home. They mercifully arrived intact, having shared the journey with several bottles of the best Vino Nobile di Montepulciano, bought from the wonderful wine cellars of our Palazzo Contucci hosts  Quite how we pulled that off and stayed within our paltry Ryanair baggage allowance from Pisa to Stanstead I’ll never know!

The only wine book I do keep is of the labels off bottles we’ve enjoyed – providing they soak off successfully. Not all do. It was this book I reached for a while back when The Wine Show on tv featured the Poliziano Rosso (incidentally, about £15 a bottle from Amazon ) Neatly stored inside my book were the labels from the Contucci bottles from 2006, and several other great wines from other trips, including some that I’d forgotten about. I was puzzled neither of the Poliziano labels were in the book, but then, as I said, not all labels soak off.

Six weeks or so later, I was rummaging in the wine corner at home, trying to make room for a couple of indifferent bottles of white wine we’d received as gifts recently (note: I am not a Chardonnay fan!). Behind the cases and storage racks is the domain of dead spiders and the accumulation of the grot of years. Something clinked there as I moved a box. Taking my life in my hands, I reached behind, and pulled out a very dusty Poliziano Rosso di Montepulciano 2003! A second grope produced its sister bottle, the 2005! I was a bit stunned, both by the coincidence and the flood of memories that hit me pretty instantly.

There was panic too. Would it still be drinkable? Recommended shelf-life was just 3-5 years. This was Year 10! Nothing for it but to try. It would be the perfect accompaniment to the pork we were having that same evening. Despite being a 13.5% wine, it’s quite a “light” red, with an almost browny tinge in certain lights. I’d got a reasonably recent point of reference for the taste – we’d had a bottle, albeit a 2013, last Christmas Eve in a restaurant in Ghent, in Belgium.

Well, happy to say, it (we opened the 2003) was just about perfect. In fact, the half of the bottle we left for the following evening was even better. I guess I’ve now got two years maximum now in which not to lose the 2005 bottle, and to enjoy its delights. Won’t be that long, though. 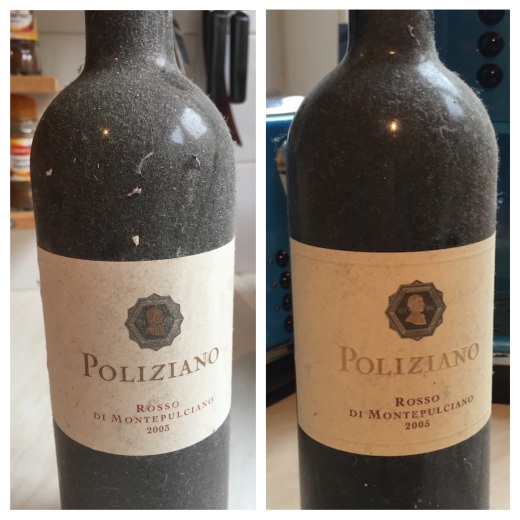 (Incidentally, Poliziano was a Renaissance character, from the late 15th century. He features in several paintings in Florence I will have seen without making the connection. This is a short biography.