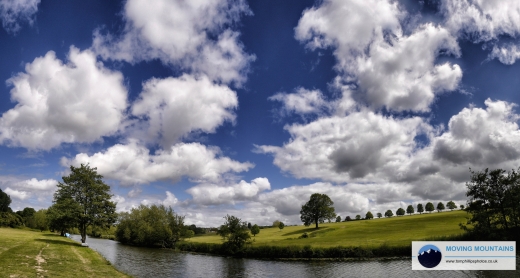 Actually, not always blue, but read on.

I’ve written before in this blog about my slightly unexpected love affair with a stretch of the River Medway, just a few minutes from my home. This is really a bit of an update on that story. Track back, you’ll find about three earlier episodes.

The area concerned, at that time, was from Tovil Bridge in Maidstone, up-stream for a few kilometres to the ancient stone bridge at East Farleigh. This still forms part, in one or both directions, of every Medway walk I do, but more recently, I’ve made the time and found the energy, to extend the walk a few kilometres more, to Teston Bridge. Even more recently, by dint of a cheap single train fare from Maidstone West to Wateringbury, I’ve added yet more to my range.

And I’m glad I’ve done this incrementally. Each of the three sections, defined by river crossings, have a character and a charm of their own. Photographically too, they offer different opportunities and challenges. I think I know every step of the original walk, to East Farleigh, now. There are even some days when I feel I ought to be on first name terms with the kingfishers that zig-zag along the river banks. I’ve shot this area at least once a fortnight over the last nine months, and slightly less regularly for about three years. Previous summers were a sore trial, as stinging nettle growth is prolific on the banks, and can completely obscure my regular views. This year, it seems some organised, but sporadic, efforts are being made to cut the nettles back. This makes for easier progress along the river path, though the views are still harder to get than in the other three seasons.

This was partly my incentive to press on past the row of sometimes-occupied pleasure and house-boats above East Farleigh lock, and to get to know the Medway up to Teston Bridge. The river from Tovil to East Farleigh flows through a predominantly wooded area, beside Bydews Wood and the remains of its ancient fulling pits, from where Fuller’s Earth was extracted. It’s a clay that is still important to paper-making, and this area was renowned for its paper-making for centuries. However, from East Farleigh towards Teston, the trees relent and we’re in an area of more open grassland, and a major Medway flood plain. I’m still in awe of the sheer amount of water that thundered through here during the Medway floods around Christmas and New Year 2013/14. The mediaeval road bridge at Teston, and the modern lock system just beyond it were totally submerged as the Medway became at least six metres deeper, and more than ten times wider than normal. Yet, eighteen months on, and there’s hardly any trace at all of that inundation. Man and nature have tidied things up, and all looks normal and peaceful.

The wide, mostly flat north bank on which the Medway Millennium Path runs occupies a shelf up to a hundred metres wide, between the river and the Maidstone – Tonbridge railway. The opposite bank has no continuous path and rises gently through what were, even in the early 1970s, hop and cherry fields. There are some beautiful, small stands of trees by the river, and some very photogenic individual trees on the riverbank. However, the most dramatic feature of this more open area can be its skies, and it’s they I’ve been concentrating on recently. I’ve been helped by the very mixed weather of late, and have (most times at least!) got my timing right and been treated to some fantastic displays of clouds.

Normal human field of view, looking straight ahead, is about 180 degrees horizontally and 135 degrees vertically. Many standard camera lenses capture no more than 60 degrees of this and, for me, that’s often not enough! I’d love to be able to afford a proper panoramic camera, but have instead to be creative and produce multi-frame panoramas to give me a proper wide view in a photograph. It’s taken a bit of learning about which lenses work best for this when used with the very capable software I have on my computer to stitch the images seamlessly together with the minimum of distortion. However, I’m happy with the results I’ve been getting lately. Photography lesson over. I’ll leave you with a few more of my favourite recent shots.